I was debating with myself whether it would make sense to send Christmas cards out this year so soon after sending Alexander’s birth announcements, but since it is his first Christmas, I didn’t want to miss the chance for marking this tiny milestone. I decided on designing them myself, like the announcements, and again printed them through VistaPrint. His adorable little gnome hat is from Hanna Andersson. And while “Peace on Earth” is a pretty general Christmas card greeting, it’s especially referential to the [ICONIC] Bing Crosby – David Bowie duet “Little Drummer Boy/Peace on Earth”, a favorite of mine since I was a kid. 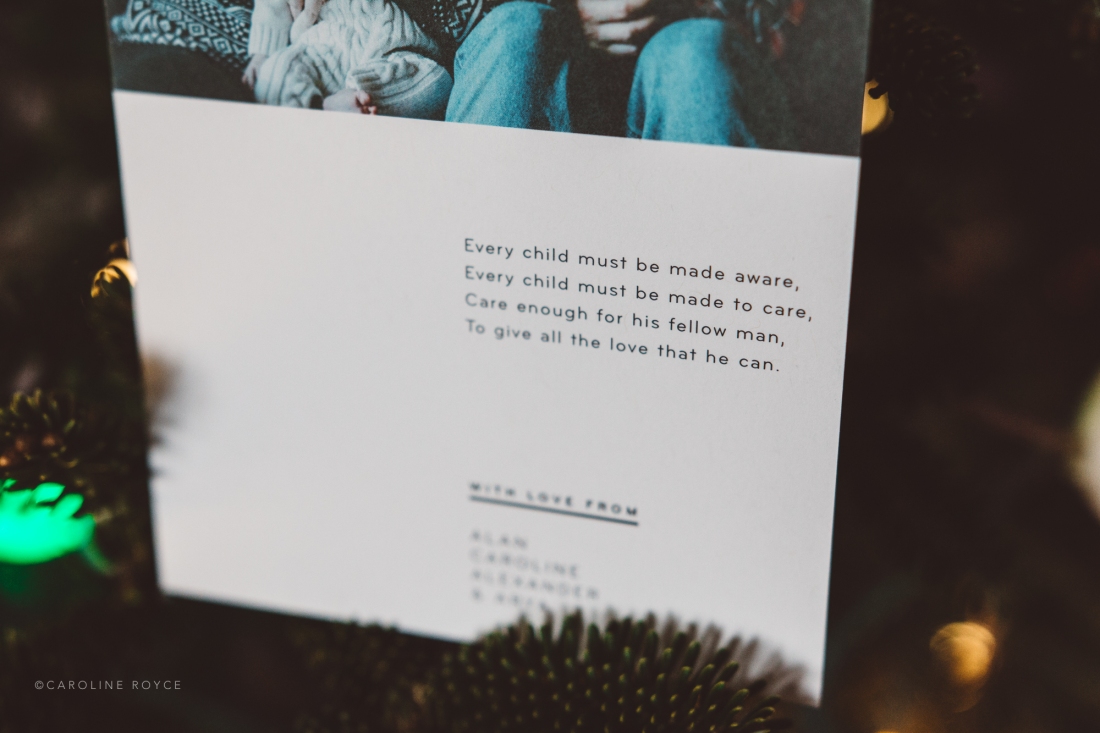 EH? So good. And, I feel like this is a really strong message right now, in light of recent political events.

The family photo was the tricky part though. We had the tiniest window for everything to go smoothly, as the cat was in her reindeer antlers, which she hates, and Alex had just woken up from a nap and had *not* had a clean diaper put on. Whoops. Plus I was controlling the camera from my phone! It was uber stress. So, I scrapped the original card design I had planned and stuck our photo on the back. 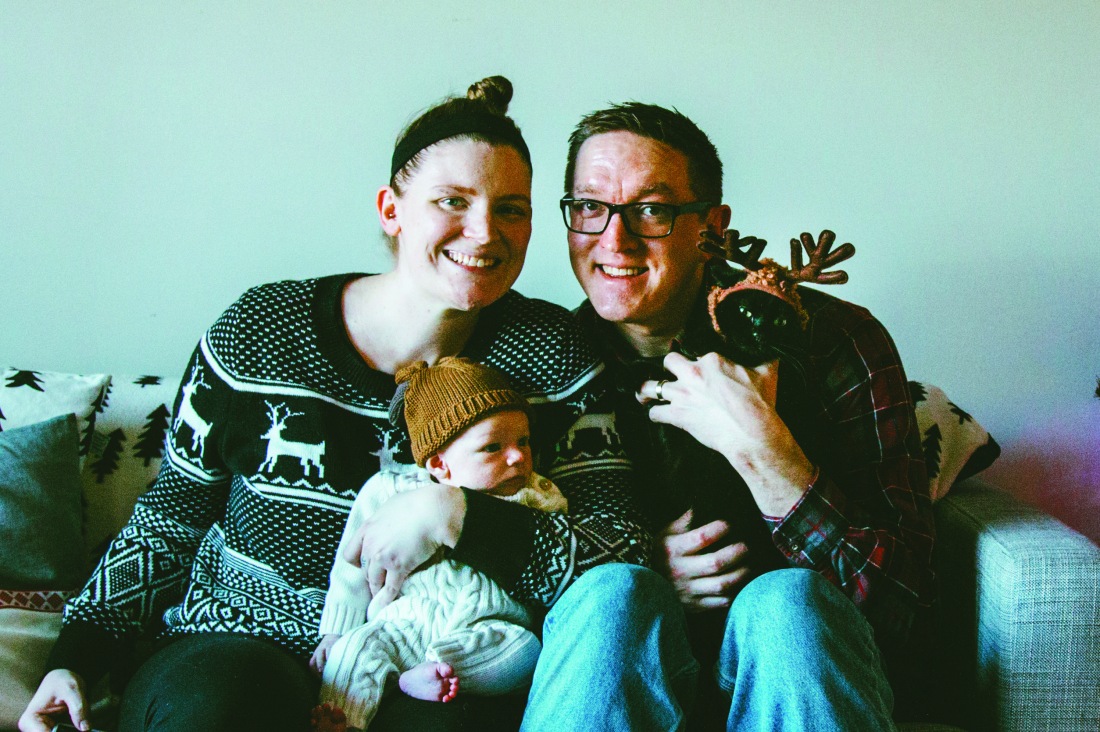 The Polar Vortex is BACK and I’m super pumped, especially because it has brought with it a really respectable amount of snow. It’s going to be a White Christmas after all! Early on in my pregnancy I fantasized about taking my baby out in the cold for winter walks all the time. In nordic countries this is the norm. With the subzero temps right now though, and him still being a little guy, I’m anxious about exposing him to the cold just yet. BUT REST ASSURED. When the time comes, I will be more than prepared. I’ve compiled a little group of items that would come in most handy for taking babies out in the cold.

Alex is becoming more and more like a little person and less like a tiny fleshy blob whose sole activities are eating sleeping and pooping. He still does all those things, but he pads it out nowadays with some staring in wonderment. SO, we’ve been busting out the little baby gym.

As of yet, he doesn’t so much play with it as it does just kinda look at it. We got the gym at IKEA and painted black and white based on this diy because as everyone knows, I hate color, and this is a much more pleasing effect. Plus, as noted in the tutorial, babies see best in black and white anyway.

The play mat is from Nature Baby — but it looks like it’s long gone now :( 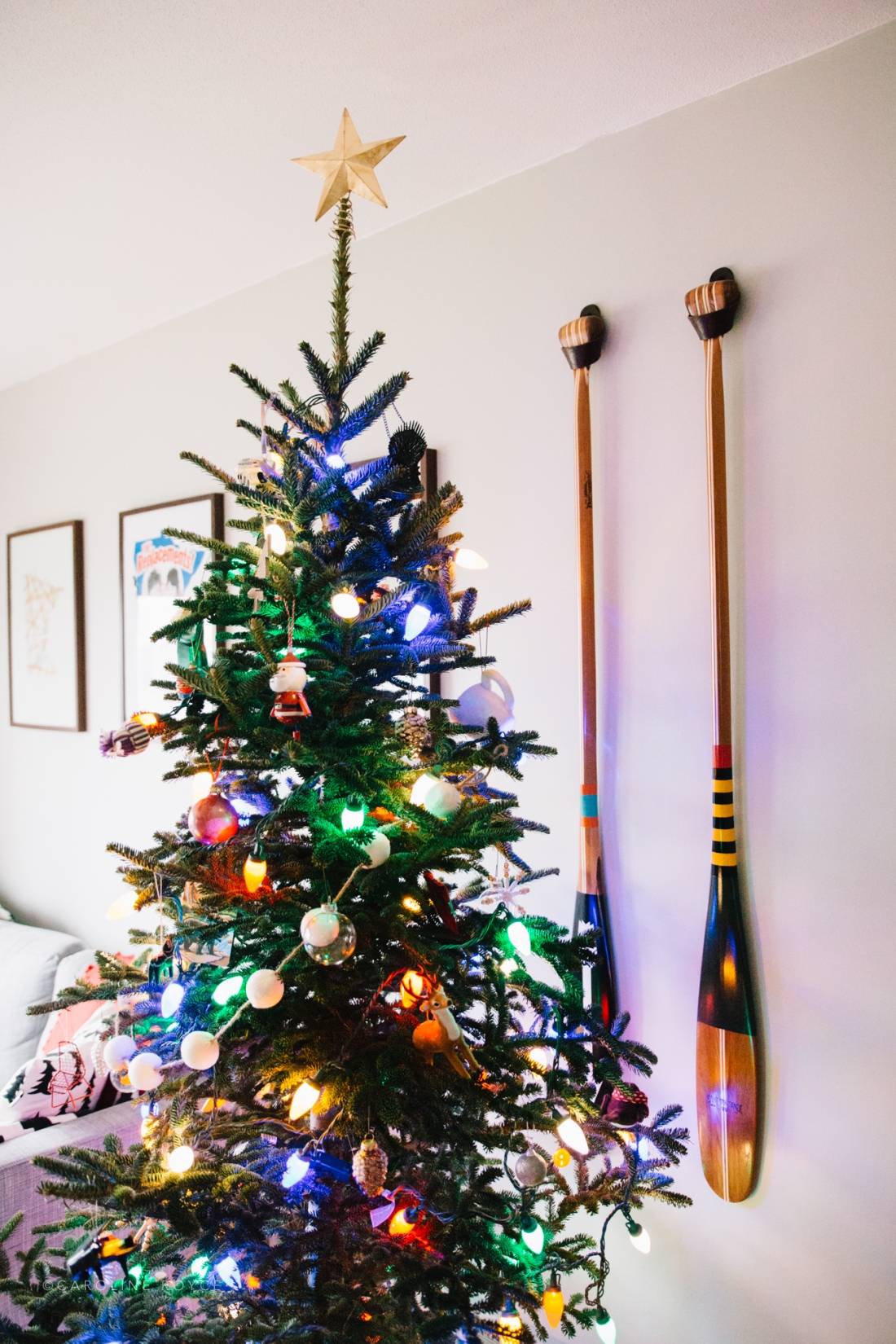 Sometimes I start to think “oh my gosh, people are probably wondering why I haven’t blogged about [this] or [that]” and then I realize that NOBODY CARES… This blog is more for me than anyone else. So, I APOLOGIZE that my post on my Christmas decorations is so much later than usual. Dedicated readers of this blog know that as soon as the clock strikes midnight on the day after Thanksgiving I already have everything all up and ready to go and the cookies are in the oven.

I’ve managed to listen to all of my fav Christmas albums — several times over in fact — but the house decorations are not as elaborate as in years past. Things are a bit more subtle this year, mainly due to the fact that we got a real live Christmas tree and that changed the whole dynamic.

It’s also been mega dreary around here lately, and no snow, so my house is dark af. My cozy german hymns would keep me warm except they just make me wistful for true winter weather.

I’ve also decided against getting a ton of greenery, like I did last year. Eh. It’s work, and it’s messy, and I got a baby. Ain’t nobody got time for that. This has been an extremely transitional year. Next year Christmas will be a much livelier affair. 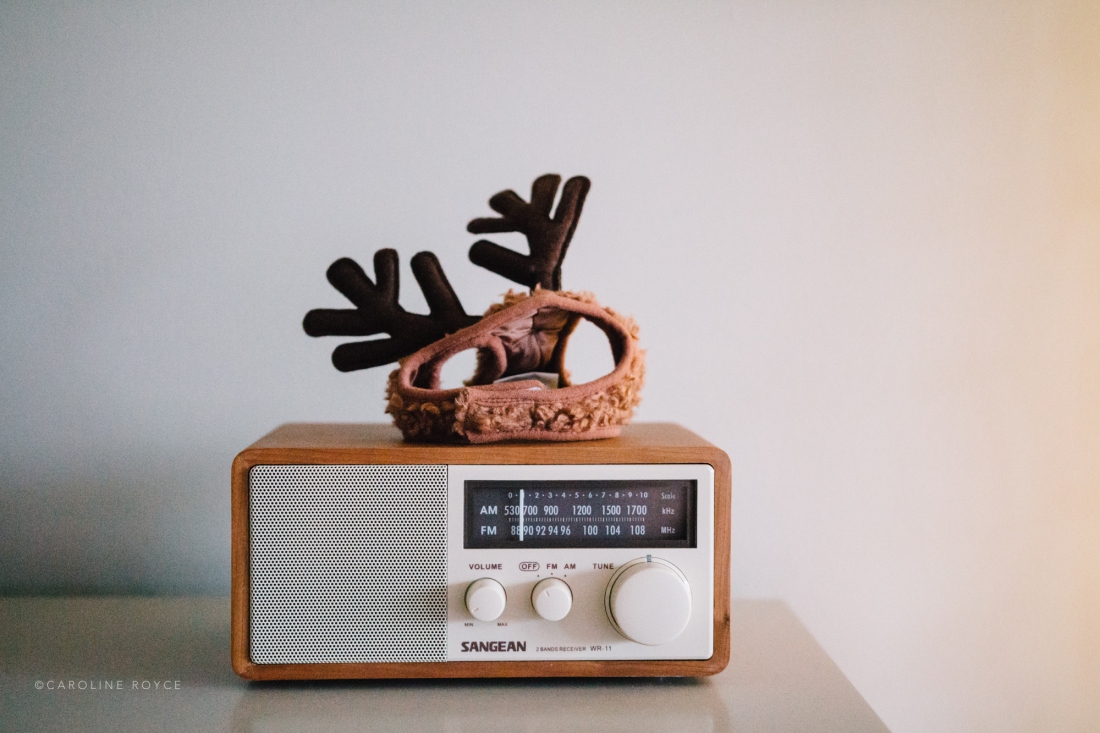 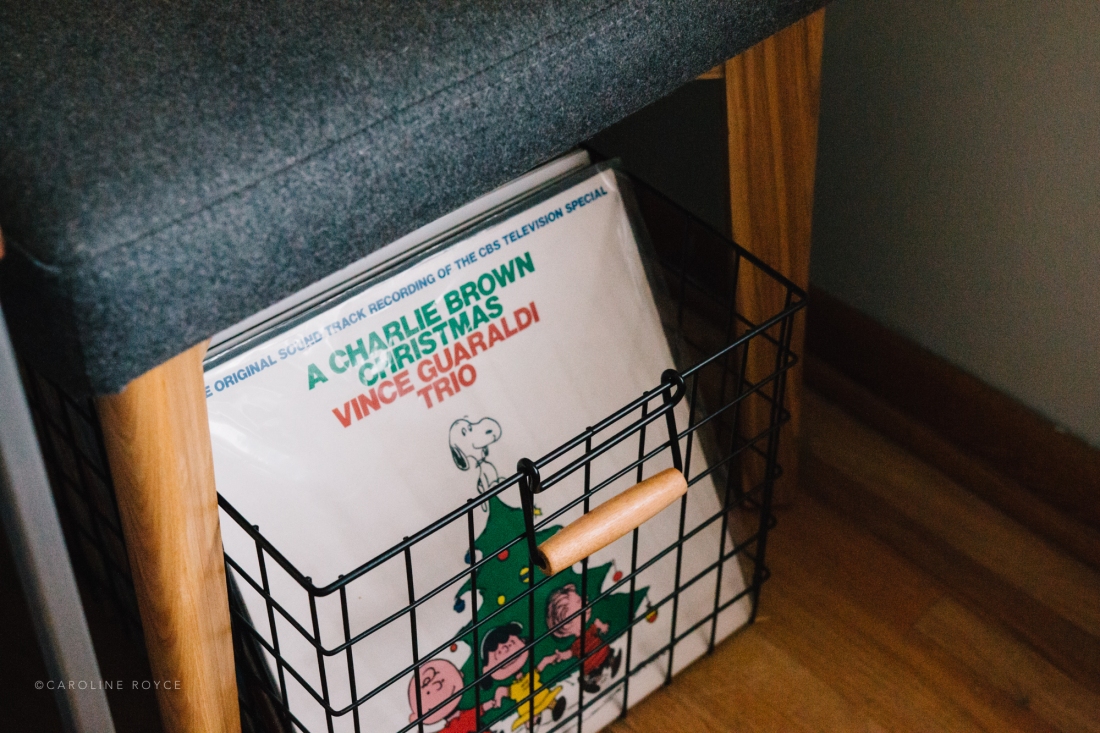 I love this tree. It’s kinda scrappy and with the big lights and comically tall treetop and gold star, the whole thing is very charming. Plus it just feels good having a real tree in the house. I can’t remember when we started cutting our own tree in my parents’ house, but it’s been a long time. 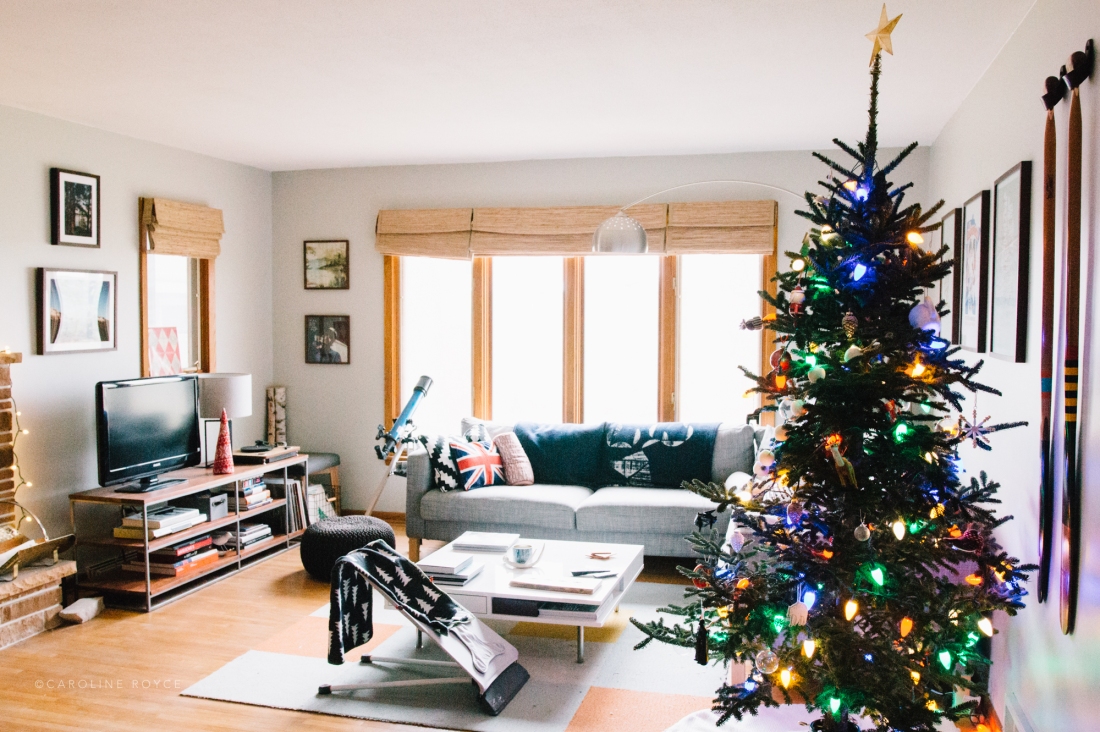 But what about your beloved vintage aluminum tree? You find yourself asking. I found a pretty good home for it:

The most fitting place for it, actually. It looks great in the ultra mid-century modern basement, next to that sexy danish modern couch, underneath the cheeky cardboard deer head. Unh, I love it when stuff comes together like this. I even got a mini tree skirt so it wouldn’t scratch up our fancy reclaimed wood side table.

And then, the setup in my office has always been this tiny silver tree from Target wrapped in simple twinkle lights. This candle has an excellent pine smell. I had one last year and I burned through it quite fast so I re-upped this year in a bigger size. 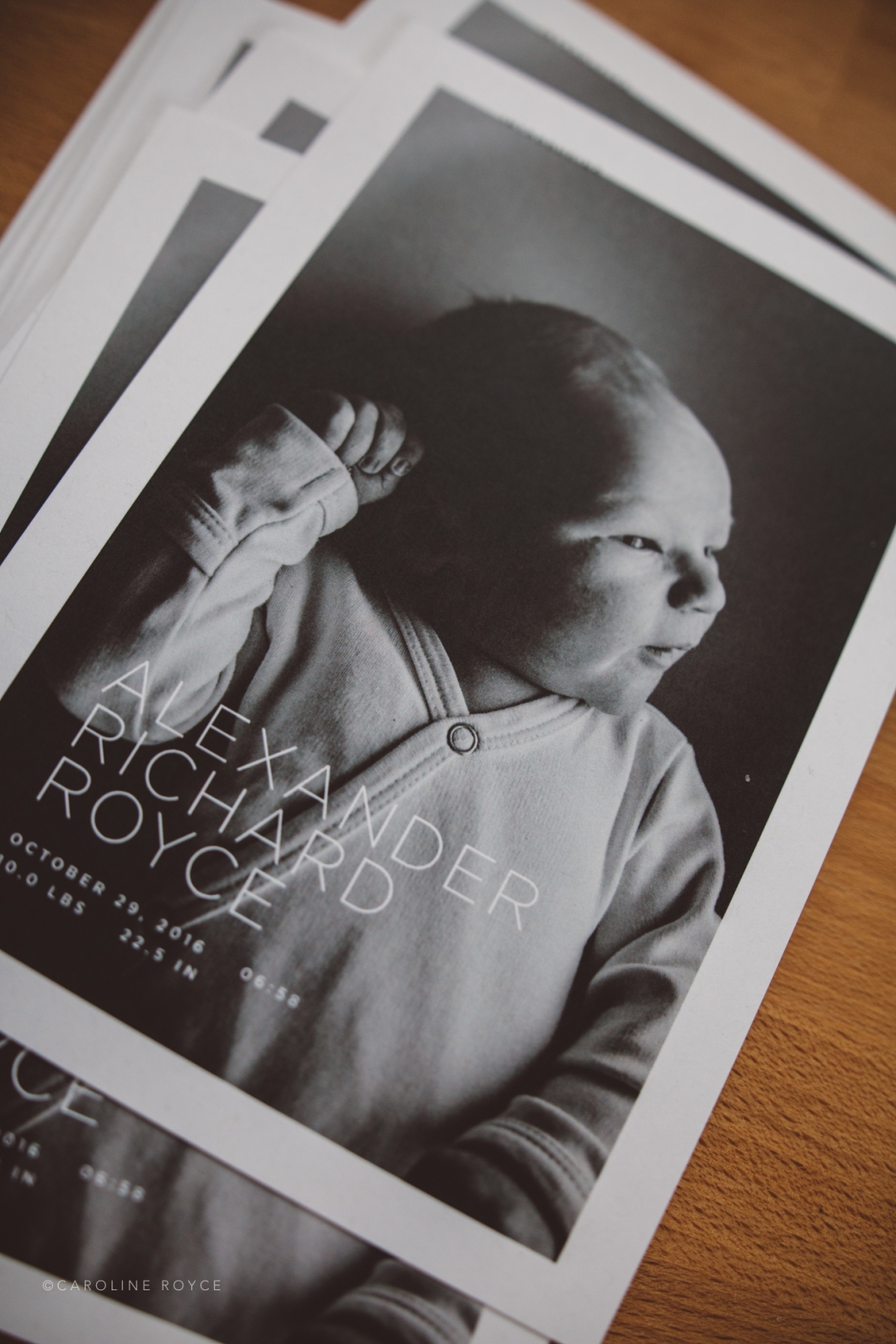 I designed these birth announcements for Alexander shortly after he was born. Well, I actually had the design ready to go and then once I was satisfied I had a worthy photo, I was able to turn them around quickly one afternoon when I had a rare couple hours of downtime (my mom was over). I had them printed through Vistaprint, which had a super quick turnaround and the quality is nice, and it was relatively cheap! These cards are 4 color, even though I went with a B&W photo (printing in CMYK gives a certain richness to a black and white image).

Sending out birth announcements so close to Christmas also begged the question: Christmas cards? I feel like I have to, for baby’s first Christmas??! I feel I simply must. 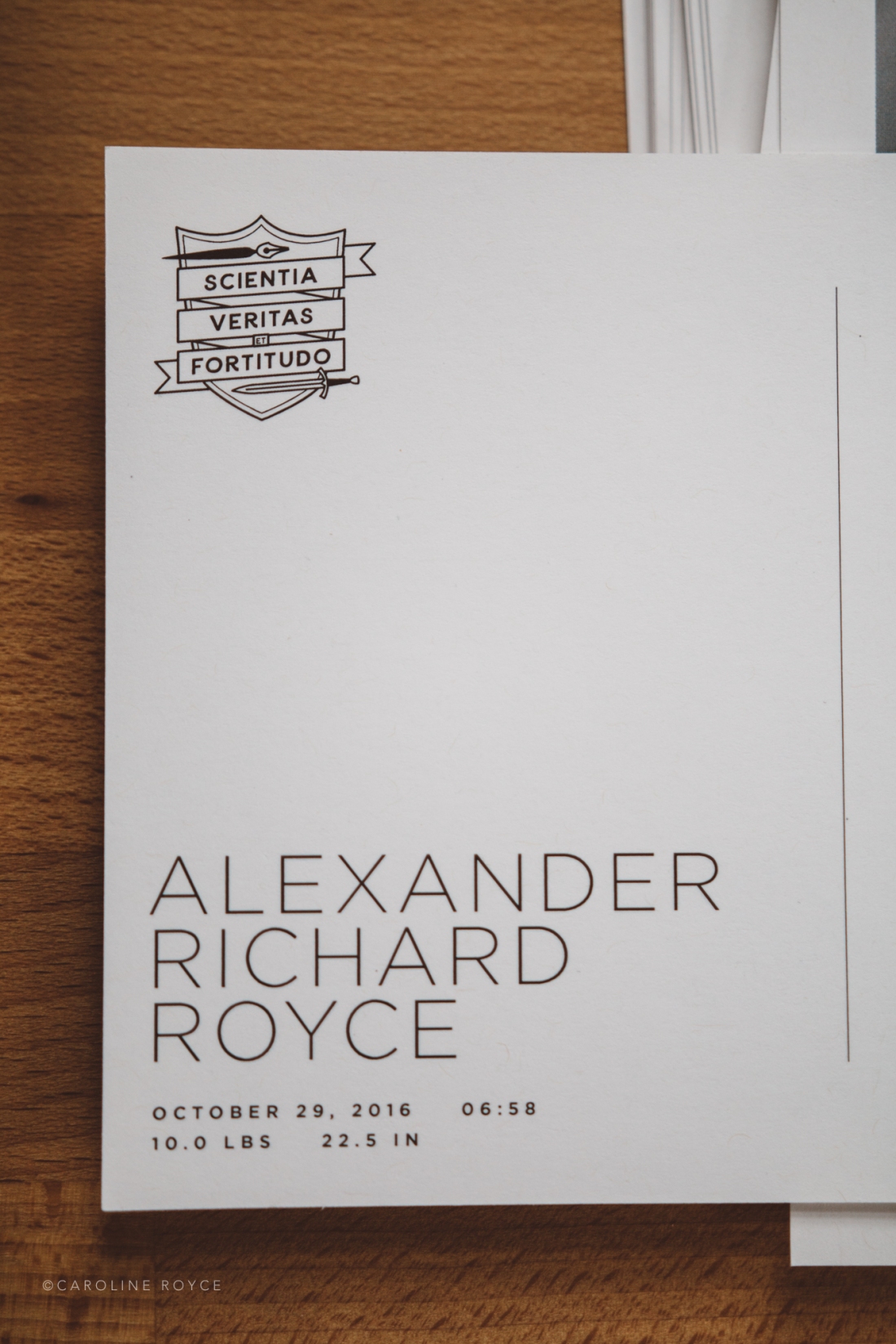 I had also designed a little crest for sweet young Alex. It means “Knowledge, Truth and Courage.” Eventually I will get a shield tattooed on my right arm to correspond with the sword on my left, and I will have Alex’s initials on it. IDK, maybe some Joy Division lyrics too.