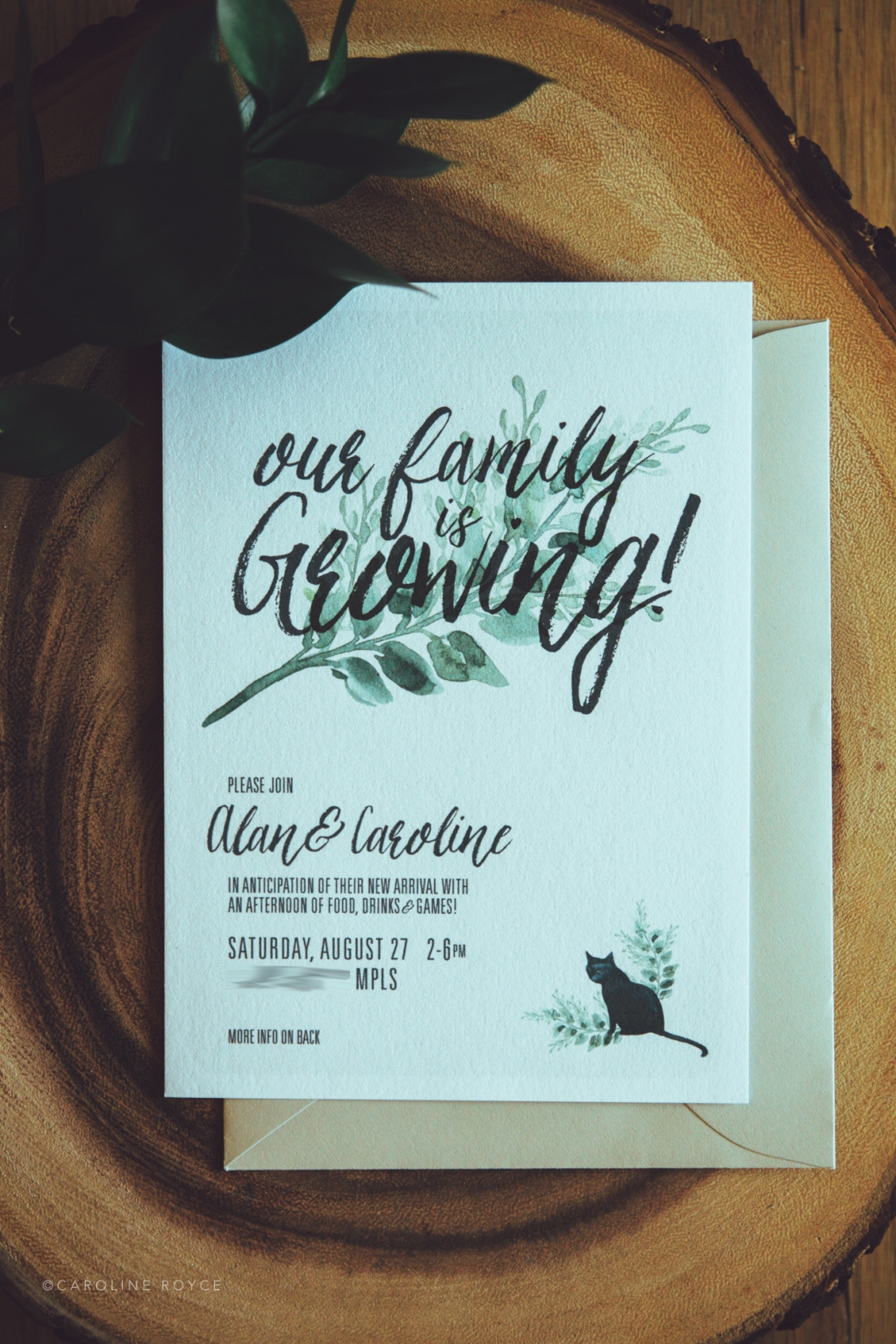 A couple weekends back we threw ourselves a little baby party, as a way to hang with a bunch of our friends, eat some good food and for me especially, to decorate the hell out of the house. Man, is there anything more satisfying/stressful than putting together an awesome-looking spread? Plus I was excited to design up some invitations which we sent in the mail and everything. It was all pretty legit (p.s. the tiny cat is absolutely the #1 best feature of the invitation). The script font and botanical illustrations were purchased on Creative Market. 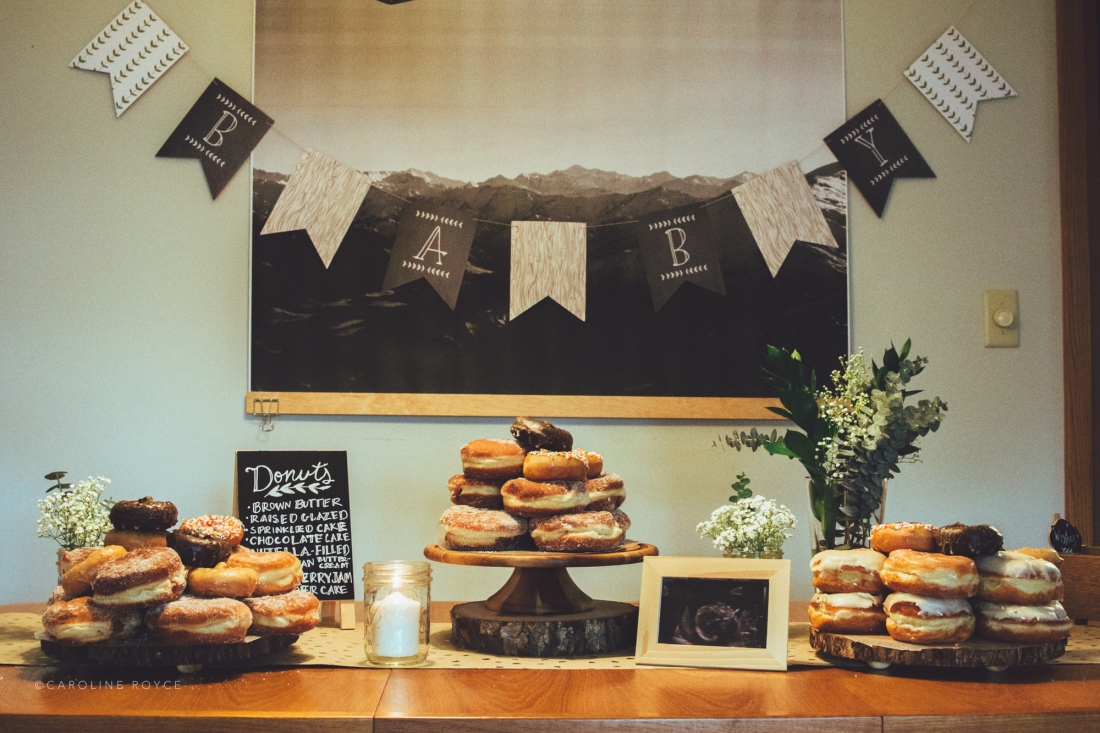 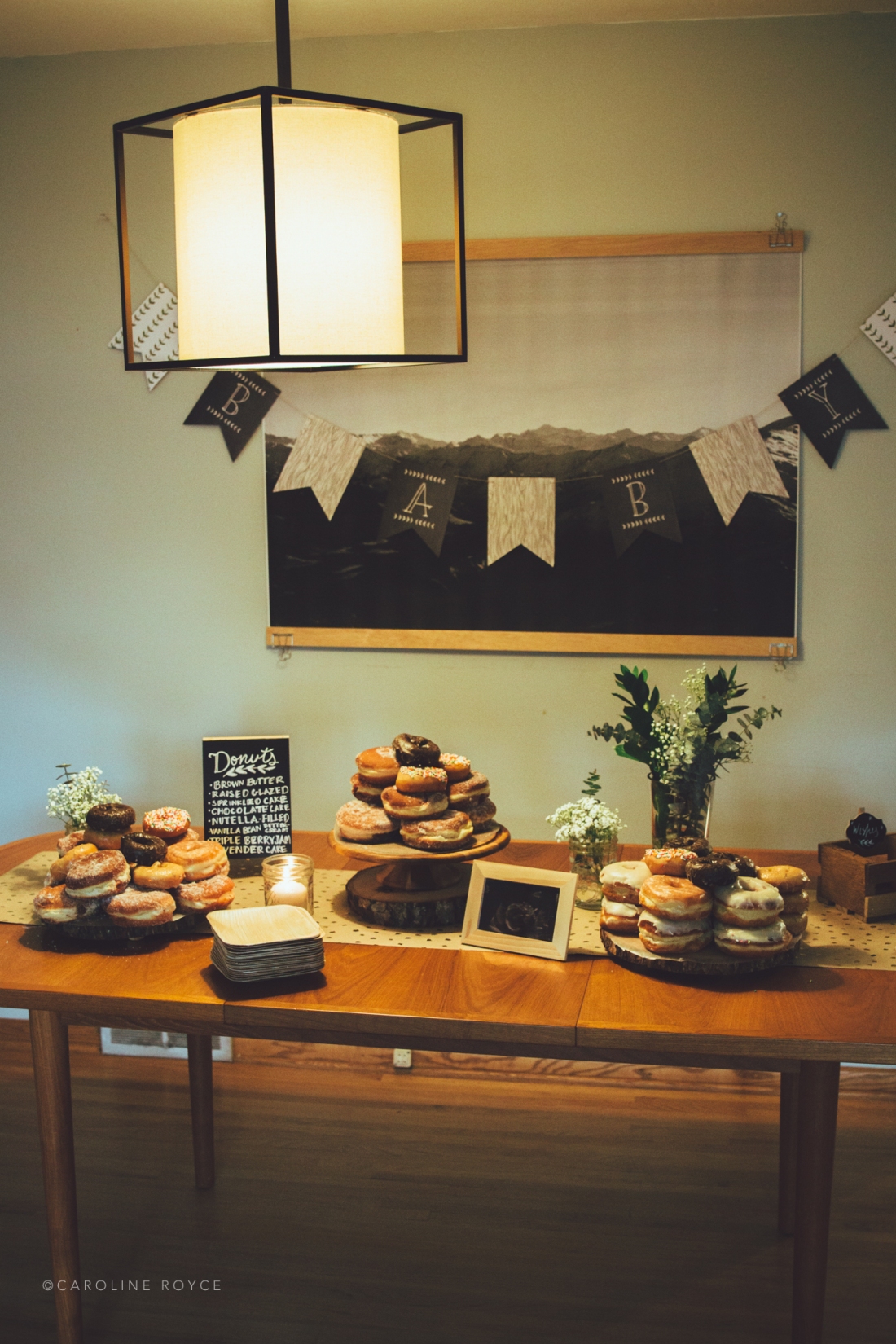 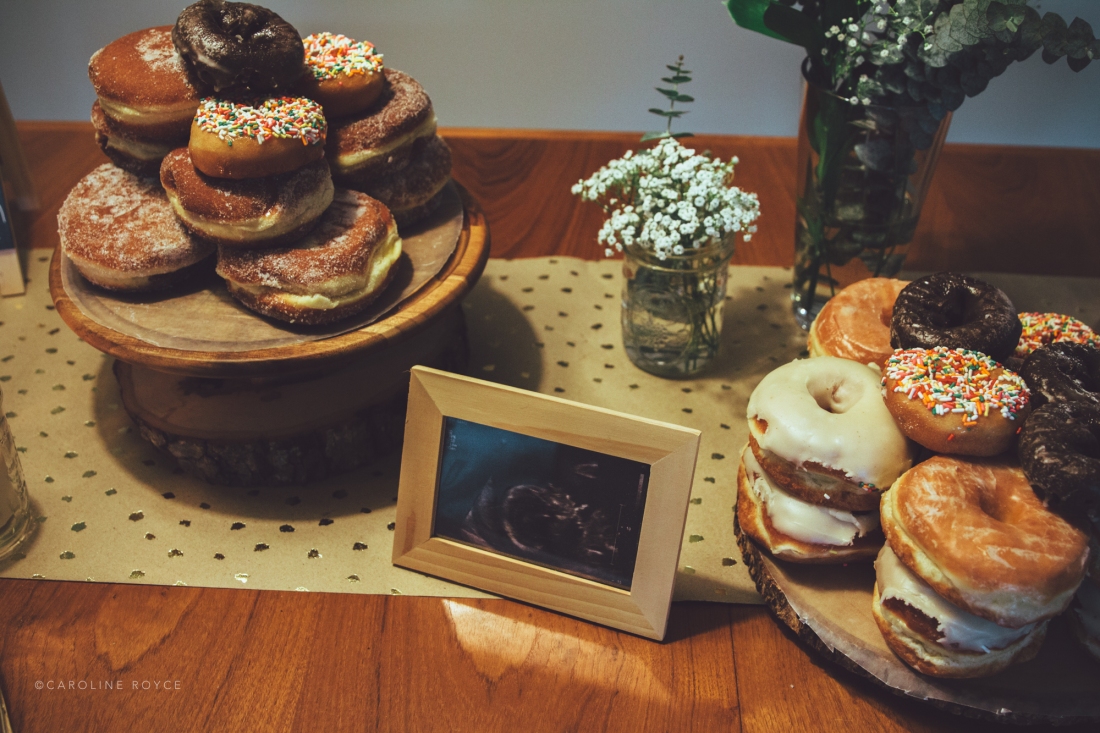 The lighting in my house is soooo bad, so these aren’t the *greatest* photos, but I had to get a bunch of this dessert table. I already had all the slab platters and the cake stand (and I used an unfinished slab I still had plastic-wrapped from Michael’s in my craft box to give it a little lift). I got the bunting and table runner from Minted. The chalkboards (also from Michael’s) were leftover from our wedding. The donuts were from Bogart’s. 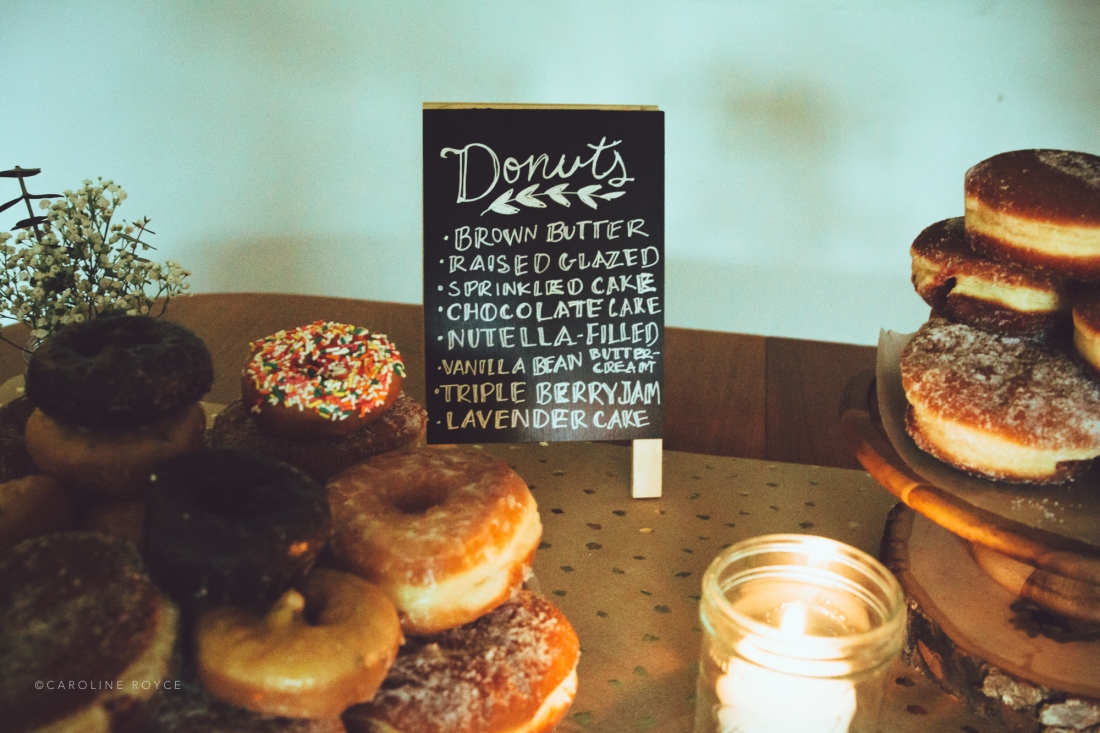 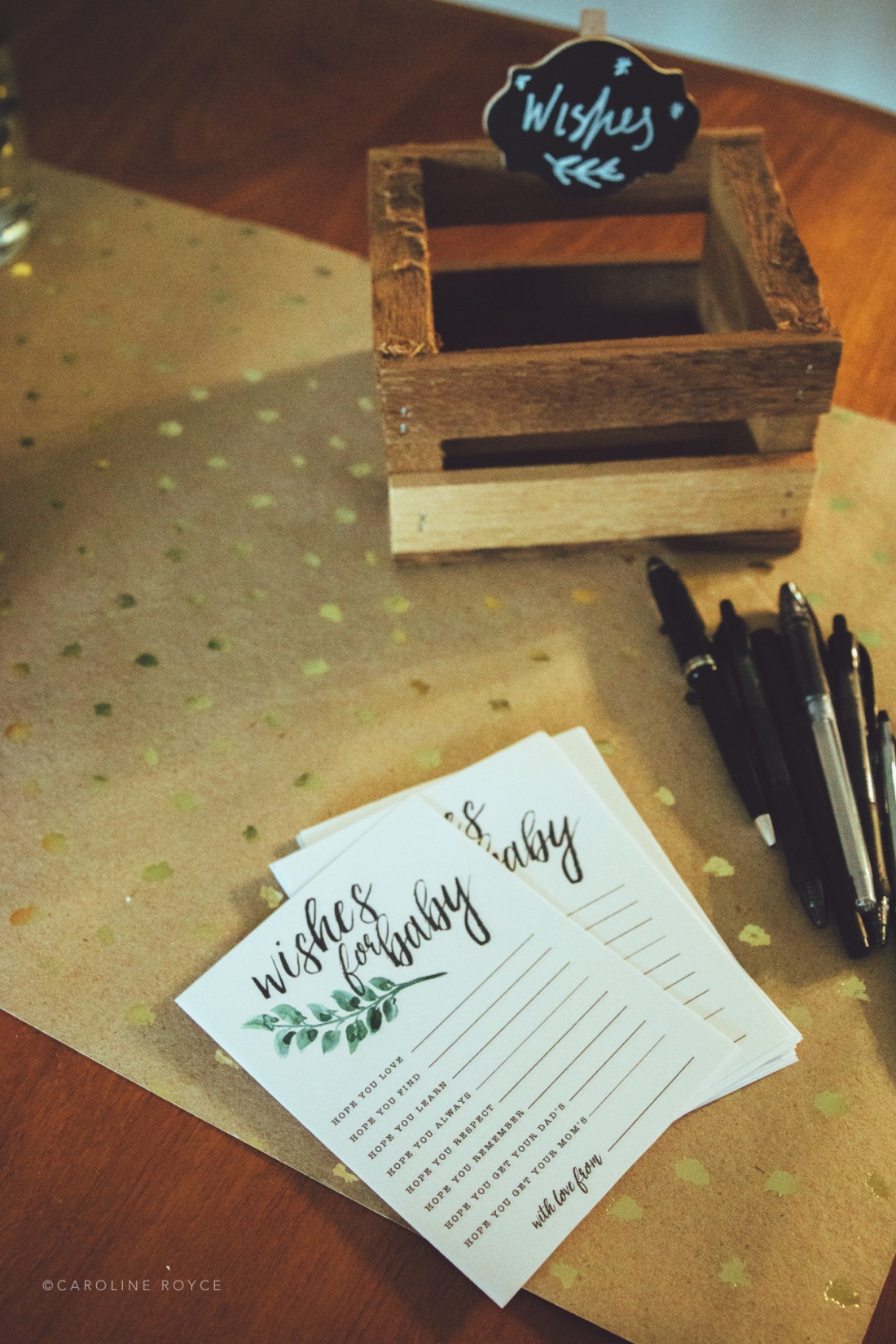 I saw something like this on Pinterest and decided to make my own. We weren’t explicitly asking for gifts, and the only group activity we did was baby trivia in the style of a pub quiz (which was hella fun and people really went with it!) but I did mandate that everyone fill one of these out. After the party ended, Alan and I went through and read them out loud to each other. Some of them were sweet and sincere and others were silly and snarky. It was a nice way to wind down from the madness of throwing a big party and see how much our baby was already loved.

For the food, we wrangled Adam, chef extraordinaire (and my sister’s boyfriend), into making some delicious pork sandwiches (and he went above and beyond by additionally providing homemade pickles, cole slaw and ratatouille). WE provided potato chips and Top the Tater, and some potato salad from Target which people said was good (I hate potato salad). 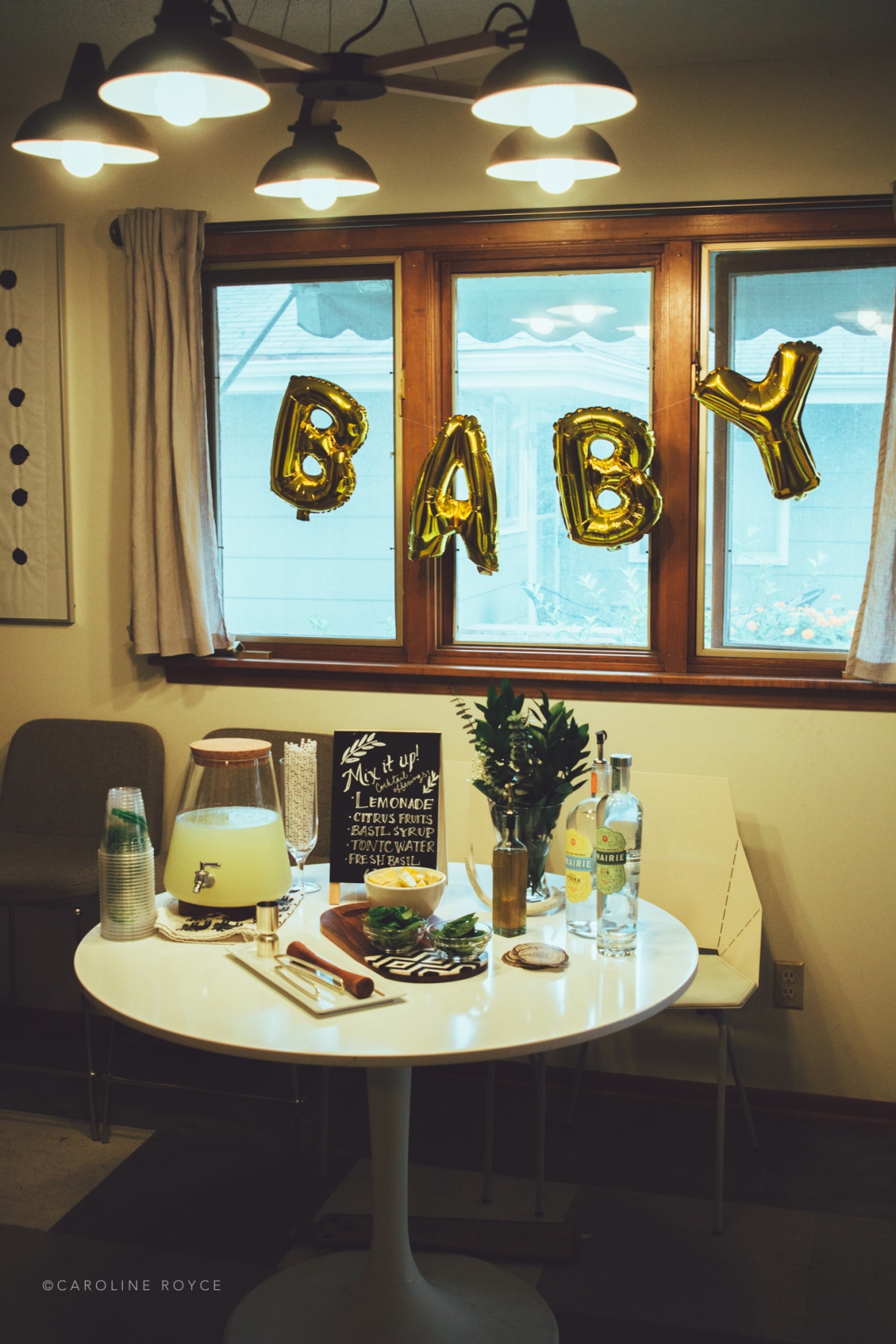 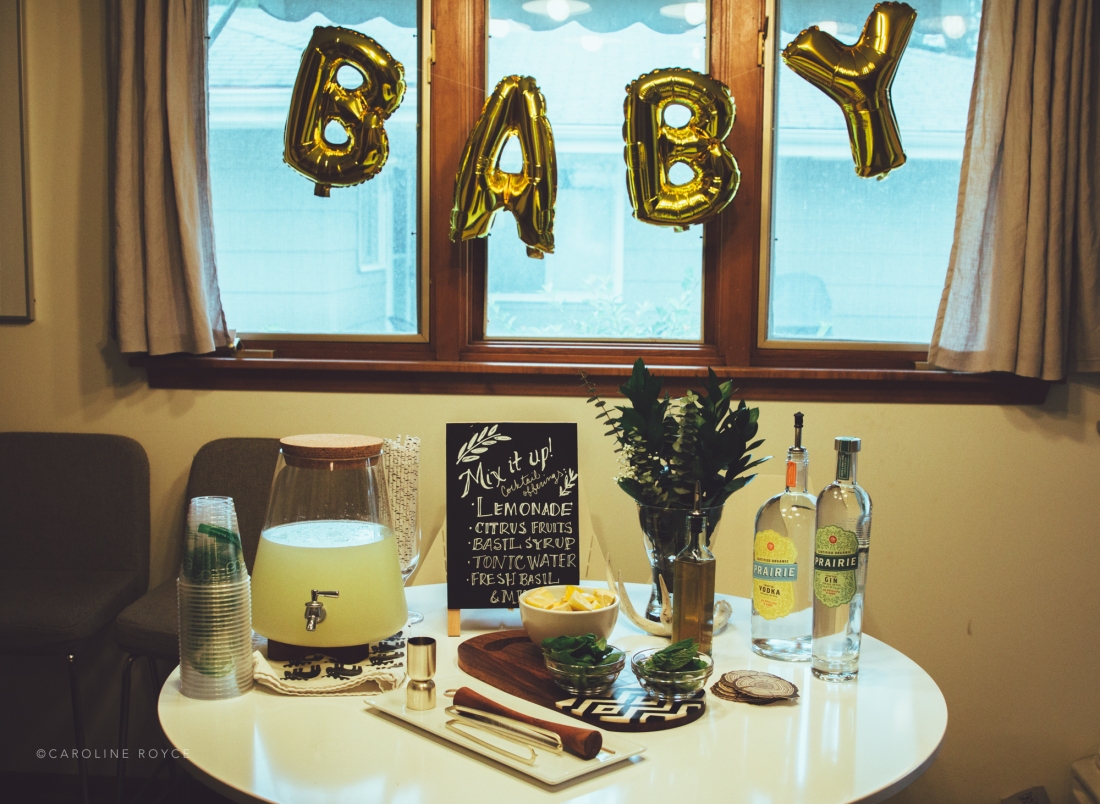 I got the gold balloon letters on Amazon (they sell pre-packaged “BABY” sets, and I got some 40″ balloons for the yard, not pictured). Everything else I had, apart from the greenery. The night before, I picked up a bunch of Eucalyptus, Israeli Ruscus and Baby’s Breath and put together my own little bouquets for around the house. Cost only about $25 and it really looked lovely. 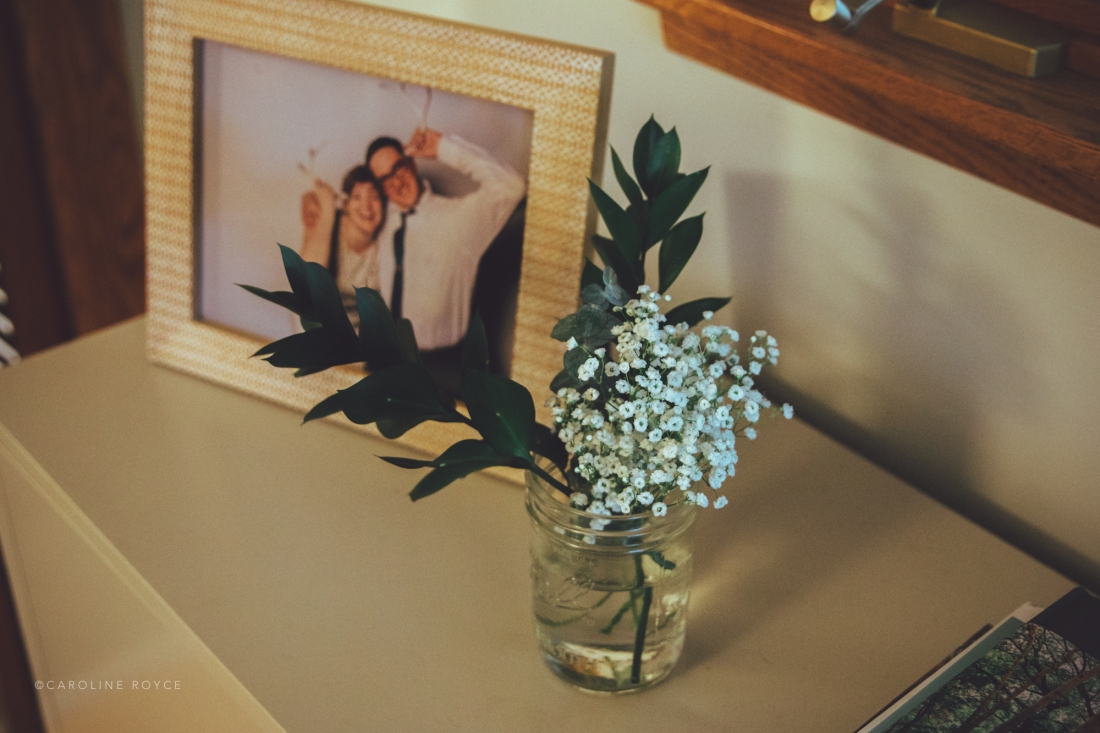 I know that etiquette dictates that mothers-to-be shouldn’t throw their own Baby Showers, because it looks like a gift grab. Instead, etiquette dictates that you ask someone to throw one for you. Which, to me, seems way more uncouth. “Hey, do you want to spend a bunch of money throwing ME a party?” I had the opportunity to throw a shower on my terms and do it how I wanted it, and it was great! We gave the option for people to bring gifts, but made it clear there was no expectation of them. The flip side of course, was that it cost money, and I was exhausted playing host while pregnant. A few friends even stepped in from time to time to rally people for the group trivia or even give me foot rubs when I had a charley horse! It was all about having the friends we value come into our home so we could be like “Hey, you guys are important, and we hope you’ll be in our baby’s life.” PLUS I was excited to wear a pretty maternity dress and try out a new hairstyle, and I’m grateful to my friend Niki for documenting it! p.s. if you care to see where I got my party inspiration from, I have a little pinterest board here.